Why banking on judges is a poor strategy

This article was originally posted in Spectator USA Monday’s Supreme Court decision in Bostock v. Clayton County was massively significant for two reasons. As a legal matter, the ruling determined that the prohibition on ‘sex discrimination’ in the Civil Rights Act of 1964 makes it illegal to fire an employee on the basis of sexual orientation or gender identity. […]

In Defense of Steven Menashi: The Left’s attacks on President Trump’s judicial nominees are getting more and more ludicrous by the week. 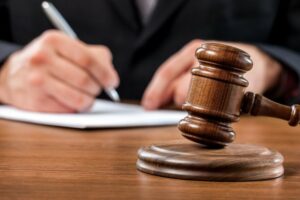 49 Federal Judge Slots Aren’t Getting the SCOTUS-Style Limelight. They Should.

President Trump’s selection of his second Supreme Court appointment, the Hon. Brett Kavanaugh, is heralded as a Republican victory. The media and both parties are singularly focused on the confirmation of Kavanaugh’s appointment. But with all the focus on this nomination, the Senate itself is ignoring equally important nominations: judges for the lower courts. The […]